Bottlenose dolphins are found in tropical oceans and other warm waters around the world. They were once widely hunted for meat and oil (used for lamps and cooking). Today, dolphins are threatened by commercial fishing with the use of nets. Though it’s for other species, the dolphin often become mortally entangled in the nets and fishing equipment.

In the wild, the bottlenose dolphin can reach speeds of over 18 miles an hour. About two-three times a minute they surface to breathe. Bottlenose dolphins tend to travel in pods and communicate with each other by squeaks and whistles. Pods have been known to come to the aid of an injured dolphin and help it to the surface.

Bottlenose dolphins track their prey through the use of echolocation– they can make up to 1,000 clicking noises per second. These clicks travel underwater until they encounter objects, and bounce back to the sender. This reveals the location, size, and shape of their prey.

Though they are known to eat shrimp and squid, the Dolphins’ main target is often a bottom-dwelling fish. 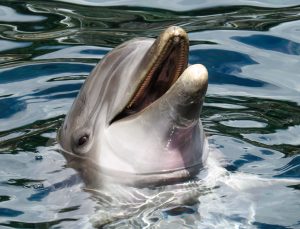