There are three types of eels you will find in the Florida Keys: Morays vary considerably in size, skin diversity, and color. Their skin can be colored in a variety of hues such as brown, green, yellow, black and blue. Despite their variations, it is easy to tell when you are looking at a moray eel due to their characteristics:

Moray eels have a dorsal fin which runs almost the entire length of the body . A moray eel’s head is large, small eyes located forward, and a wide mouth with large teeth for tearing flesh. They have a secondary set of toothed jaws in their throat called pharyngeal jaws, which thrust forward to grab and drag prey down through their digestive system.

Moray also eels secrete mucus over their smooth skin which allows them to swim quickly around the reef without abrasion.

Have you ever wondered why moray eels continuously open and close their mouths? It makes you wonder if they’re hungry, right? Well, since the size of their gills are small, morays have to maintain a flow of water and facilitate respiration by the movement of their mouths in a gaping motion. Unfortunately, many people mistake this as aggressive posturing, and it’s part of the reason why moray eel’s have a fearsome reputation. Moray’s also have poor eye sight, so it’s hard for them to distinguish where food ends and where human fingers begin. Aside from attacking when under threat, moray eels have been known to bite off and swallow digits of those feeding them.. Oops!

Moray eels are carnivores- their diet consists mainly of  fish, mollusks, and crustaceans. They go hunting mostly at night and use their sense of smell to make up for the lack of eyesight. This makes ill or dead creatures easy to detect and therefore favored prey. Moray’s are also known to hide in crevices waiting until their prey is close enough, and then launching themselves from the burrow to clasp the prey with their powerful jaws. Scientific studies have shown hermaproditism in morays, some being sequential (born male, later become female) and others are synchronous (have both functional testes and ovaries at the same time) and can reproduce with either sex.

Mating: begins when water temperatures are at their highest. The morays will wrap each others bodies together, either as a couple or 2 males and a female. They simultaneously release sperm and eggs in the act of fertilization.

Hatching: the eggs take the form of leptocephalus larvae- appears as thin leaf-shaped objects. They float in the open ocean for around 8 months, then  swim down as elvers to begin life on the reef. They live between 6 and 36 years. Their main predators are large groupers, barracudas and people. Snake eels are representatives of  more than 200 species found throughout the world, mostly in tropical or temperate waters. These snakelike creatures are more gentle than their aggressive relatives, the morays. A distinguishing feature of a snake eel is the tail-  it’s pointed and sharp . The snake eel uses its tail to burrow backward into the sea bottom, creating a protective burrow. The spotted snake eel of the southern Atlantic and Caribbean attains a length of 4 feet. 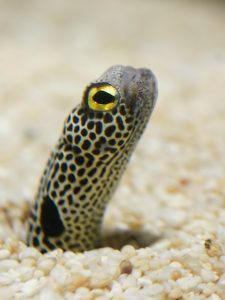 If you didn’t know any better, from far away, you might think that a colony of garden eels looks a lot like a field of swaying seagrass.  There may be up to hundreds, even thousands of  garden eels living together in a colony. Garden eels can grow to be 16 inches long, though you may never see more than a quarter of their body.

By tightening its body and making itself rigid, a garden eel drives its pointy tail into the sandy sea floor.  Once the eel is deep enough, it will wiggle its dorsal fin and push sand out of the hole. The slime from their skin causes the walls of their burrows to cement, preventing cave-ins. Like many other reef animals, garden eels escape from predators by diving into their reef-bottom burrows.

Garden eels are sexually dimorphic– the males and the females look very different. Not only does the male’s jaw stick out further than the females, but they are also much bigger.

During mating season, the males and females move their burrows closer together.

After mating: garden eels release their fertilized eggs into the current. The eggs float  near the surface of the ocean. The eggs will hatch out and the larvae will float along until they are large enough, then the juvenile garden eels swim down and make burrows of their own.