When you see a lionfish, the first things you’ll notice are their red/white zebra stripes, long pectoral fins, and their needle-like dorsal fins. The second thing you’ll notice if you get too close is that those needle-like dorsal fins are venomous! Fortunately, the venom released from their dorsal fins is purely defensive (they are not out to get you). Unfortunately, a sting from a lionfish is extremely painful and can cause nausea and breathing problems (and its rarely fatal). 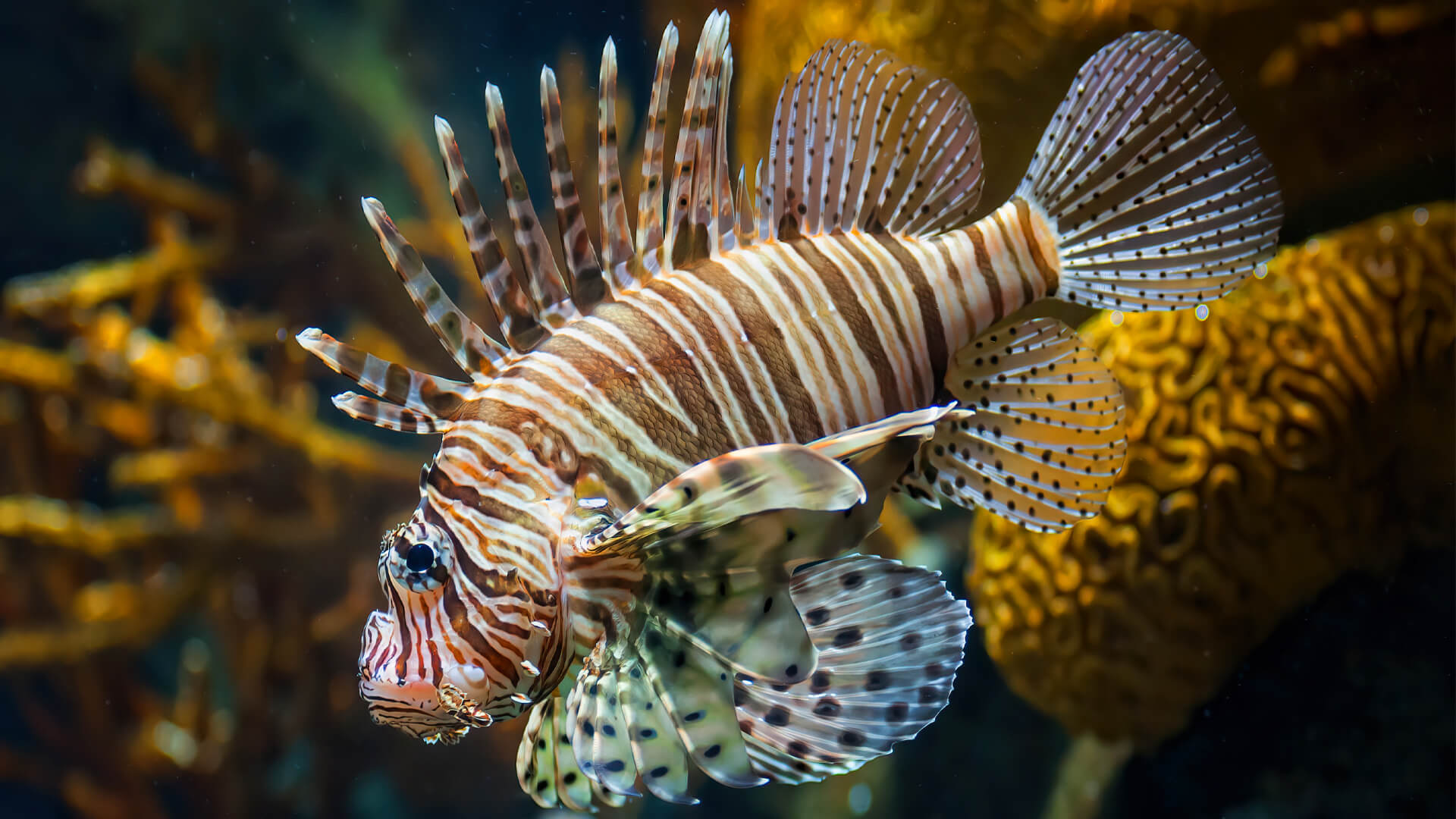 Lionfish rely on camouflage and their lightning-fast reflexes to capture prey– mainly fish and shrimp. Most often, lionfish corral their prey into a corner. They can consume prey that are more than half of their size and are known to prey on more than 70 marine species. They have also been known to compete for food with native predatory fish (grouper and snapper).

On average, lionfish grow to be about 12 inches long, but can grow to be 15 inches, and also can reach up to 18 inches when they are not in their native waters. As mentioned before, lionfish have needle-like dorsal fins. They 18 of them to be exact. These “spines” should be avoided during any capturing and handling due to their ability to inflict painful injuries.

Lionfish are natives to the Indo-Pacific and Red Sea. The first reports of lionfish occurred off of Florida’s Atlantic Coast in 1985. It’s still unknown how exactly the lionfish found themselves in our waters, but all it took was a handful of the species to start an invasion. Since the 2000’s, reports of lionfish have increased rapidly. In 2010, they found their way to the northern Gulf of Mexico. One theory is the lionfish likely followed currents up the Atlantic Coast, around to the Bahamas and then into the Gulf.

Lionfish have been found in shallow waters and depths up to 1,000 feet.

Lionfish are a predatory reef fish, meaning they eat native fish, which then reduces native populations and has negative effects on the overall habitat and health of the reef as they rid the environment of species that serve important ecological roles such as fish that keep algae in check on the reefs. Lionfish also compete for food with native predatory fish such as grouper and snapper. The Florida Fish and Wildlife Conservation Commission encourages people to remove lionfish from Florida waters in an effort to help limit the negative impacts to native marine life and ecosystems. Lionfish can be speared, caught in hand-held nets, or caught on hook and line. There is no recreational or commercial bag limit.

Lionfish typically reach maturity in less than a year, but  their growth slows as they get bigger. Males mature at about 4 inches and females at about 7 inches. When lionfish spawn, females release two egg masses of about 12,000-15,000 eggs each. These masses drift for about 25 days. In warmer climates, lionfish can spawn every four days.
The flesh of the lionfish is not poisonous or venomous and they are popular in some parts of the world as food. Their population numbers are growing which is causing concern in the United States, where some feel this non-indigenous species presents human and environmental dangers.

Once an adult lionfish finds a suitable habitat they tend to stay there, and can eventually reach densities of more than 200 adults per acre.