Do you like going to the beach? Sunbathing and playing in the sand? Have you ever wondered if it was imported or not? I’m pleased to inform you that the sandy beaches of the Florida Keys are all natural, recycled excrement of the beautiful, locally fed parrotfish. That’s right, excrement!

Parrotfish adopted their name from having a fused-beak structure– like a parrot! A parrotfish’s diet is primarily algae. To eat, they use their beak to pulverize coral to reach the algae filled polyps hiding in the coral reefs. Sand is ground-up, undigested remains of coral. SO, thanks to parrotfish we are able to have sand on the sea floor, sand bars, and beaches.

Another reason why the name parrotfish is so fitting for the marine animal (closely related to the wrasses) is like a parrot, they are very colorful. There are several different types of parrot fish- the Key West Aquarium houses rainbow parrotfish and  midnight parrotfish. 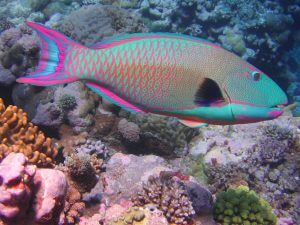 Like the wrasses, parrotfish use their pectoral fins to swim. Occasionally for speed they use their tail fin. The largest of the parrotfish family is the bumphead parrotfish found in the indo-pacific, measuring more than 4 feet and reaching a weight of 100 pounds. The average size for the 80 identified species of parrotfish is 1-4 feet and they can live up to 7 years. Parrotfish can be spotted either by their unique coloring or by the clouds of waste that trail behind them as they swim.

Like most fish, male parrotfish contain harems of females. This means that in the event of there being no dominant male in a school, the largest female changes gender and color to become the dominant. This transition is not just scale deep, the new male, once fully transitioned can mate with the remaining females in the school. Similarly to how humans wear pajamas to bed, a parrotfish produces mucus bubbles blown from their mouths and creates a translucent nightgown to protect themselves while in slumber. Scientists have a theory that this mucus gown masks their scent and therefore makes it harder to be found by nocturnal predators such as parasites and moray eels. You won’t find many places in the United States that serve parrotfish, but in some places in the world, like Polynesia for example, will consider it a delicacy. In Polynesia, parrotfish was once considered “royal food” and was only eaten by the king.

Choosing which characteristic is most remarkable is a difficult task. What feature sticks out most to you?