What we once called a “starfish” now goes by the name “sea star” because well, it’s not much of a fish, now is it?

It’s an echinoderm, closely related to sea urchins and sand dollars. Sea stars have no brains and no blood. Their nervous system is spread through their arms and their “blood” is actually filtered sea water. Because sea stars house most of their vital organs in their arms, they are able to regenerate limbs, and in some cases, entire bodies. Sea Stars also don’t have eyes on top or underneath their bodies (weird, right?). They have light-sensitive eyespots on the tips of their arms help them find food. Sea stars have bony, calcified skin, which protects them from most predators, and many wear striking colors that camouflage them or scare off potential attackers.

Most sea stars also have the remarkable ability to consume prey outside their bodies. Using tiny, suction-cupped tube feet, they pry open clams or oysters, and their sack-like cardiac stomach emerges from their mouth and oozes inside the shell. The stomach then envelops the prey to digest it, and finally withdraws back into the body.

There are some 2,000 species of sea stars living in all the world’s oceans, from tropical habitats to the cold seafloor. The five-arm varieties are the most common, hence their name, but species with 10, 20, and even 40 arms exist.

What Types of Sea Stars are most common in the Florida Keys? 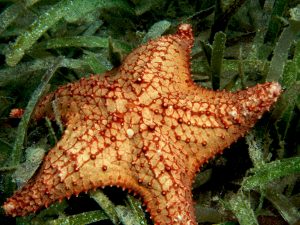 Cushion stars are a protected species and its harvest is PROHIBITED. Cushion sea stars have thick, short arms and a heavy body. They have knobby spines that form a net-like geometric design of contrasting color, and they are often orangeish brown to tan in color. Larvae and juveniles often inhabit seagrass communities and adults are typically found on sandy bottoms.

Nine-armed sea stars are characterized by nine long, tapered arms and tend to be bluish gray to purple to tan. They are commonly found washed up southwest Florida shorelines as they   inhabit shallow sand or sandy mud bottoms. You’ll notice in the picture on the far left that the bottom sea star is missing several arms. Like other echinoderms they have the ability to regenerate these appendages. A slender sea star ranging in color from reddish tan to bright orange, with brighter color concentrated on the ends of its arms.  Their body has a textured appearance and areas in between the  dorsal spines are pale blue to bluish white. Their feet, or podia, are orange. Brown spiny sea stars are found  on natural and artificial reefs as well as sandy bottoms. These sea stars have five long, slightly tapered, equal length arms with bluntly rounded tips. Their color varies from deep red to reddish brown or dark purple and they typically have  orange to orange-brown spines with tufts of maroon to violet papulae (spiny projections). They inhabit intertidal areas with sand and rubble as well as seagrass beds, and hardbottom habitats.

These sea stars have broad flattened arms with scale-like plates. The plate sizes are greatest along the arm edges, where they are arranged in  rows the lengths of the arms. They also have a stripe on the dorsal midline of each arm. Their color ranges from gray and light brown to dark gray or black. They inhabit sandy bottoms around reefs.