Guests can get up close and personal with one of the Florida Keys most common shark-the Nurse Shark. While learning about this unique species, guests can learn a little bit more about some of the outlandish myths surrounding sharks and what we can do to help and protect these important animals. After each presentation, 10 lucky guests will have the opportunity to feed one of our resident nurse sharks!

Things to Know About Sharks in Key West

With the Discovery Channel’s Shark Week gaining in popularity, it’s raised a lot of questions about sharks, their behavior and their habitat. For those afraid of the water or who live in landlocked cities and don’t experience the ocean every day, it seems to only amplify the fear and mystery surrounding sharks and their threat to mankind. Every summer, news watchers are alerted of shark attacks at local beaches that further stoke the hysteria. While there’s no doubt that sharks are the apex predator of the sea, they’re often misunderstood and unreasonably vilified.

Key West is a small island surrounded by both deep and shallow waters of the Gulf of Mexico and the Atlantic Ocean. It’s home to the third largest barrier reef in the world with a thriving marine ecosystem that makes for exciting snorkeling adventures. The ocean is a shark’s natural habitat, so this creature can be found in the waters of Key West. But before you go running back to shore with the Jaws theme song playing in your head, slow down and learn about the sharks of Key West and how to stay safe while having fun.

The most common type of shark in Key West is the nocturnal, docile nurse shark. If you’re out on a snorkel or dive trip, you have a good chance of spotting one of these sharks snoozing on the seafloor underneath a coral ledge. Although they may appear sluggish, nurse sharks slurp up bottom-dwelling organisms in their bellows-like mouths with amazing speed. They feed mostly at night on spiny lobsters and other crustaceans, small stingrays, sea urchins, squid and bony fishes.

They’re not predatory or aggressive. They are light yellowish-brown to dark brown in color and sometimes with small dark spots. It has a flattened body and a broad, rounded head with two conspicuous barbels between the nostrils, which are used to help find food. The mouth is filled with rows of small, serrated teeth for crushing hard-shelled prey. If you spot one while in the water, enjoy the view from a safe distance before they swim away from sight. Their strong jaw can certainly do some damage though, so don’t do anything that would make it strike out in self-defense. 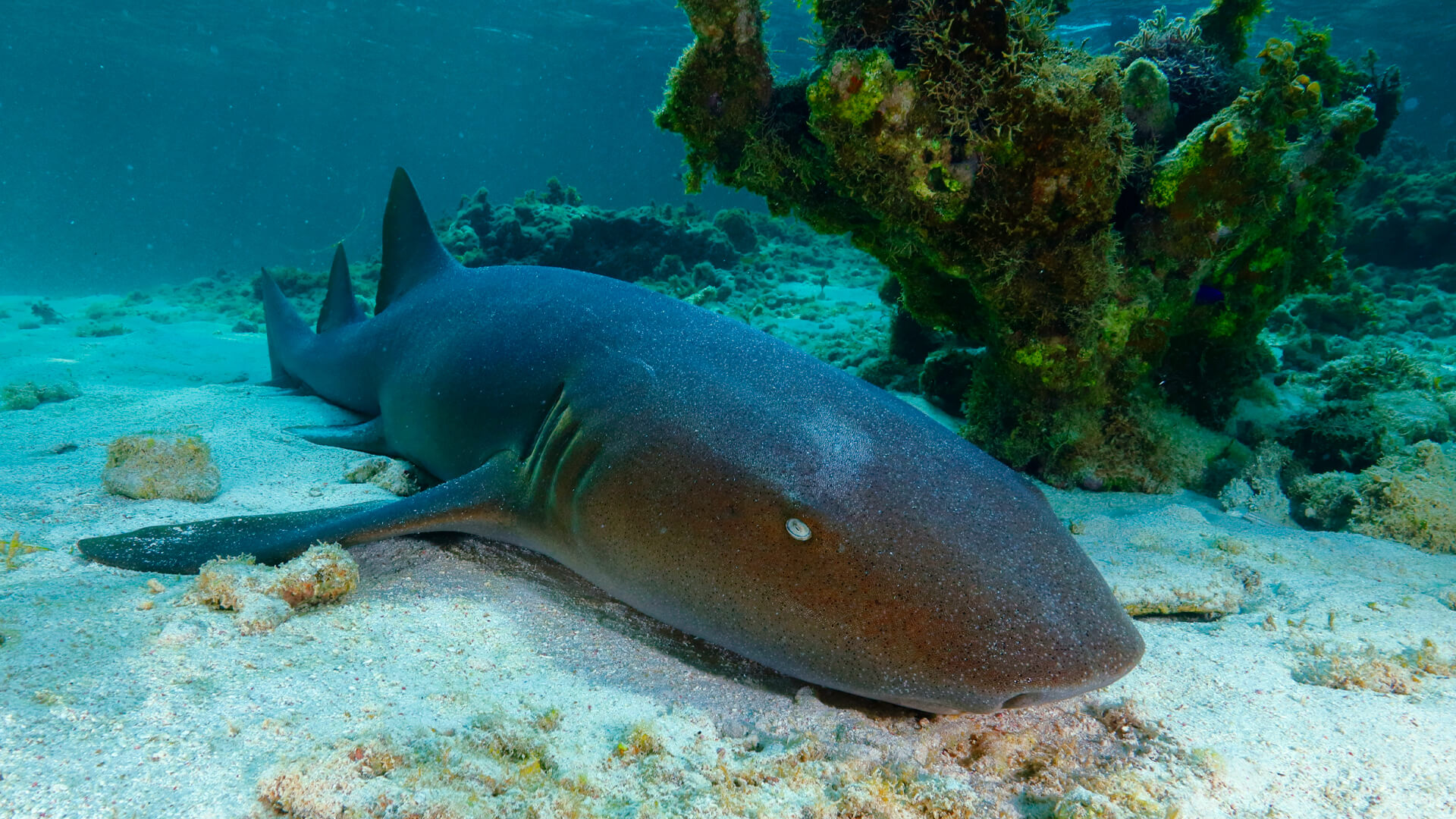 The sandbar shark gets its common name from the sandy and muddy flats, bays and estuaries in which it’s commonly found. The sandbar shark can be recognized by its large first dorsal fin, large pectoral fins and mid-dorsal ridge.

The diet of a sandbar shark typically consists of small bony fishes like menhaden, croaker, snapper, mojarras, as well as crustaceans such as crabs and shrimp. The blacknose shark has a greenish-gray colored body with a white/ yellow colored belly. Tips of dorsal fin and upper lobe of caudal fin are black or dusky colored and it has black spot below the snout, which give it the name “blacknose shark.” Blacknose sharks are quick swimmers that feed on pinfish, porcupine fish, box fish, puffer fish, anchovies and even octopus. The lemon shark is yellow in color which is where the name derives from. They mainly stay close to the surface of the water. Because of their poor eyesight, lemon sharks depend on the magnetic sensor in their nose which allows them to attract prey and to find others to mate with.

Lemon sharks mainly feed on small prey that aren’t able to put up much of a fight. When meat can’t be readily found, the lemon shark will feed on mollusks and crustaceans. They don’t require a large volume of food due to their small size so they can go quite a while without feeding. In Key West, there has never been a fatal shark attack, and there’s only been one incident reported in the record books since the 1800s. For those who like statistics, you’re 45,000 times more likely to die from a car accident than from a shark attack.

Please contact us for additional information regarding shark tours for the Key West Aquarium.